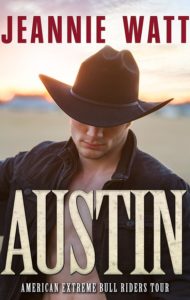 Business whiz Kristen Alexander achieves—that’s what she does. She’s set goals, made the right moves, enjoyed the rewards of hard work and careful planning… That is, until she’s abruptly fired from her banking job in Reno, Nevada. Now she’s scrambling to make ends meet, job-hunting by day and waitressing in the casino by night. The last thing she expects is to run into a hometown guy—one who could easily blow the lies she’s been telling her friends and family about how well she’s doing.

Bull rider Austin Harding is having an amazing season touring with the American Extreme Bull Riders Tour, and he’s enjoying every second of his success—working hard and playing hard as he fights to win the money at the end of the tour. But his focus on the big prize wavers when he runs into hometown girl Kristen Alexander during a Reno tour party. Why is the woman who once told him that he would never amount to anything slinging drinks in a casino? After the way she judged him years ago, he feels entitled to some answers… But the answer he gets is not the answer he expects.

Will Austin be able to set aside his resentment over their shared history to give their attraction a chance to ignite?